The Previous Gig at the Horseshoes

When the Psychos played The Three Horseshoes last year, there was only one person and a stray dog watching and if it wasn't for a brilliant turn out by the Psycho Chicks, the gig would have been a disaster.

It's a real shame because the Horseshoes is a great pub, with a really good area for the band to play and plenty of room for people to dance if they want to.

But as you can imagine the boys were a little apprehensive about playing.

Their mood wasn't lifted when they arrived only to find an empty bar..... 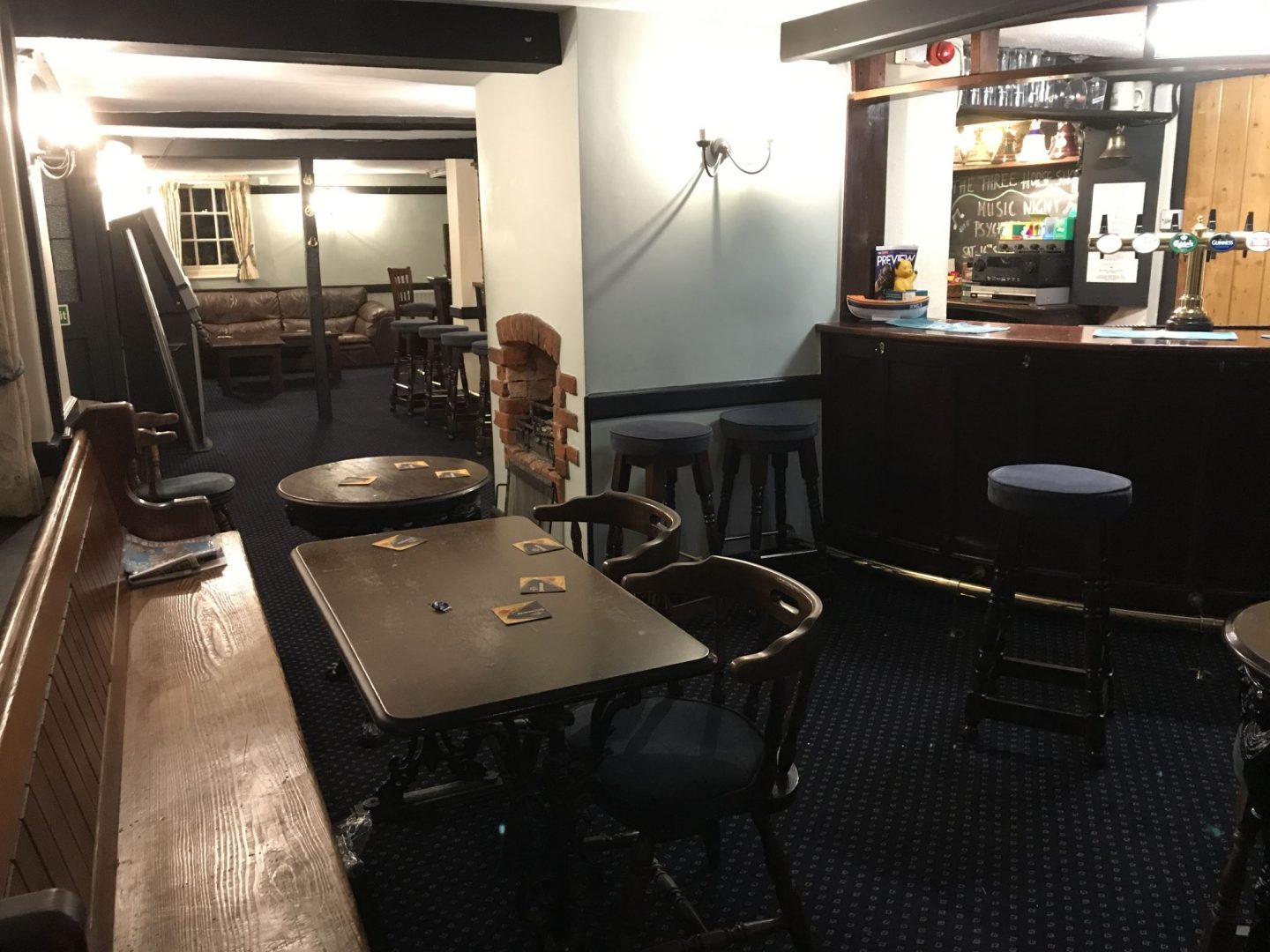 On top of this Rudy had been acting strangely.

For those of you who know the band, Rudy was a well-respected judge, juggling the bar with the bass and playing with some of the greatest rock bands in the world. But he was never happier than when he was sending someone down to the cells for a few years and it's unusual to get a smile out of him on stage.

However, over the last few weeks he could be heard whistling a little tune to himself, sometimes singing Wagner and even telling a joke or two.  No one knew what was wrong and there were some genuine concerns for his health.

Then one night, as he was putting his gear away after a rehearsal, a note dropped out of his pocket.

This is what it said: 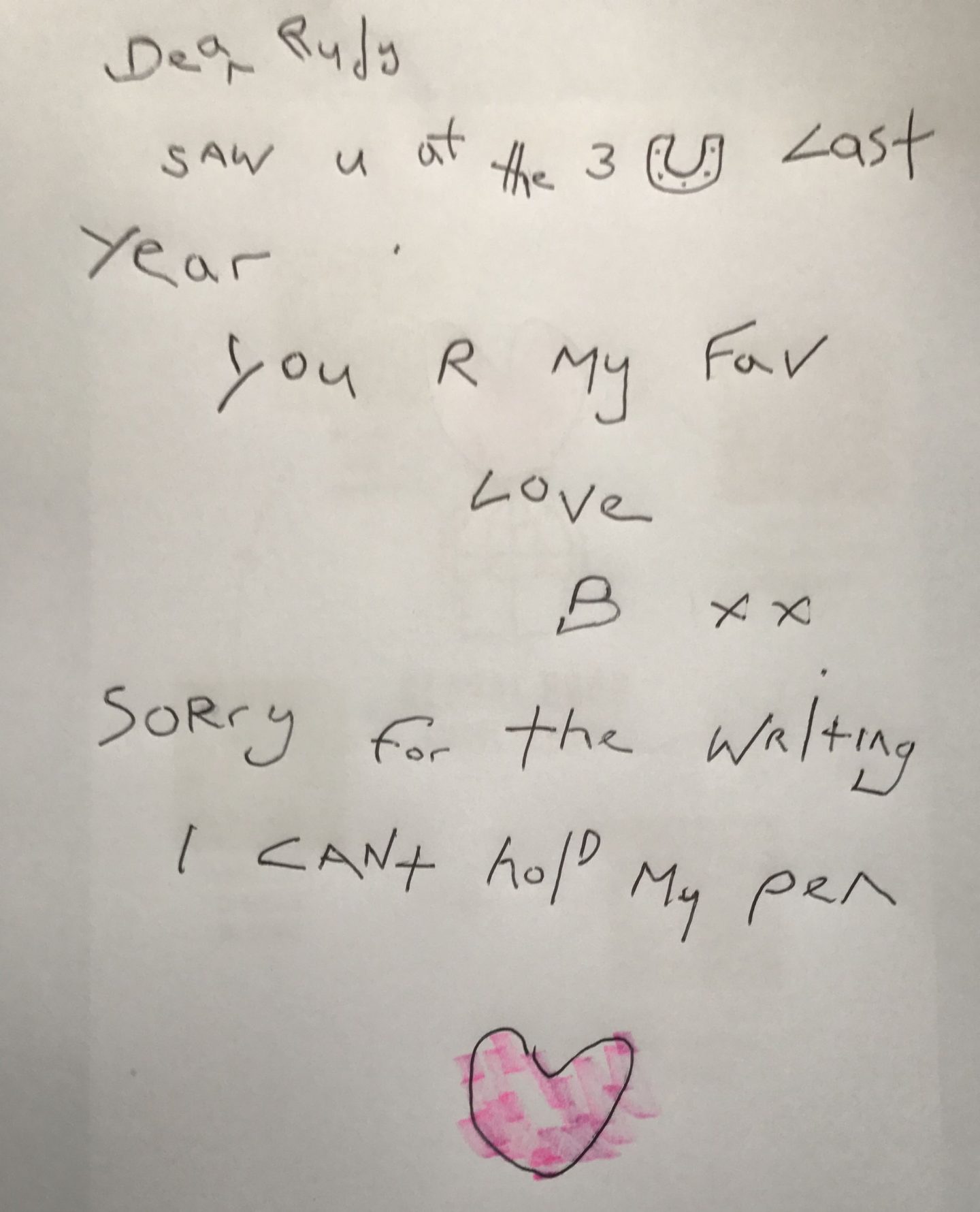 Rudy doesn't get much fan mail as most of it goes to the sex on legs that is Floyd (I have no idea who writes this, honestly I don't!)

When we arrived at the gig, Rudy jumped out of the car and virtually skipped to the pub as if he were dancing through the daisies on a lazy sunday afternoon.

Once inside a further note lay on the table:- 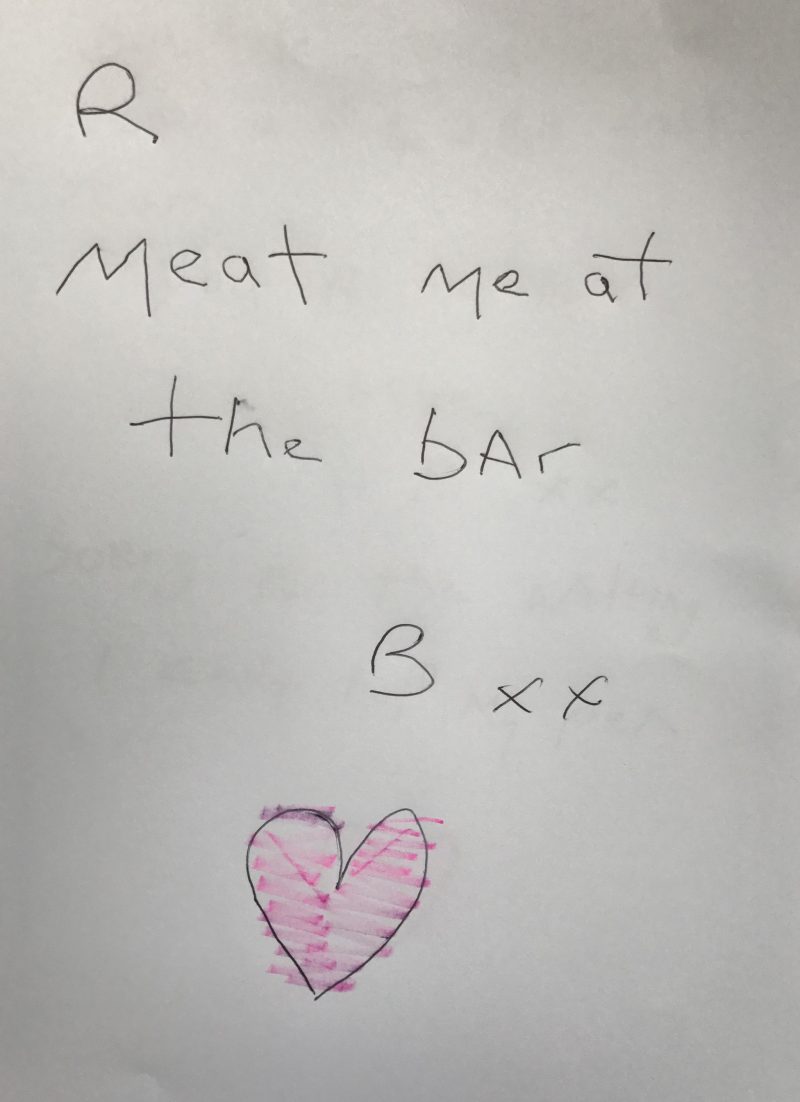 As you can imagine Rudy was a little disappointed when he found out his number one fan was a small brown dog. But actually Bingo really liked the band, especially Rudy, so that cheered him up no end.

As for the pub, the boys shouldn't have worried, as it soon filled with a good crowd. The lovely log fire gave a Christmas feel and a warm, friendly atmosphere prevailed which seemed to rub off on the band who played a faultless relaxed set (which makes a change). An 11 o'clock finish was nice too.

Special thanks to the guy who saw us last time and came back, the wonderful barmaid, the Psycho Chicks, the crowd who came all the way from Colchester and North Countrymen's John for coming along again - we REALLY appreciate it.

Well, we have about 7 weeks off now, but while some of the band are away on their hols, the rest will work hard on two new songs that should be something special - fingers crossed.

Here are some of the friendly faces who made it such a pleasant night. 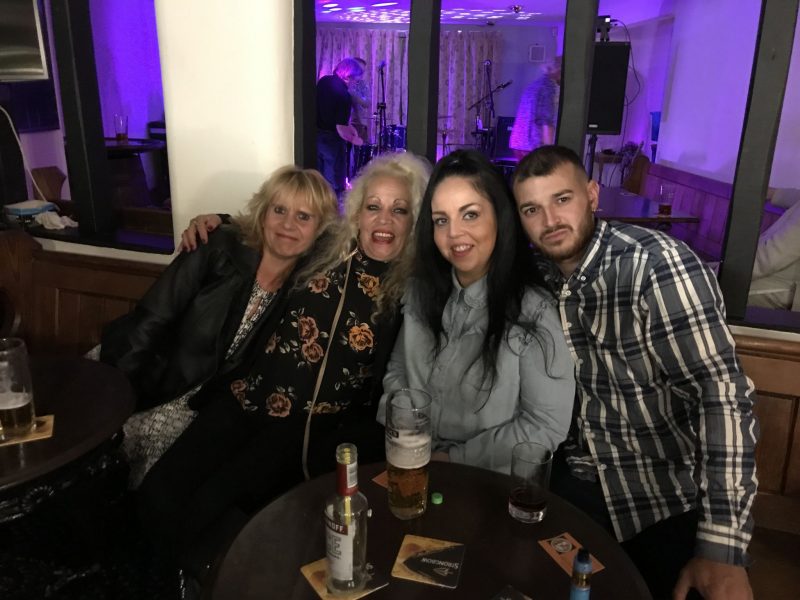 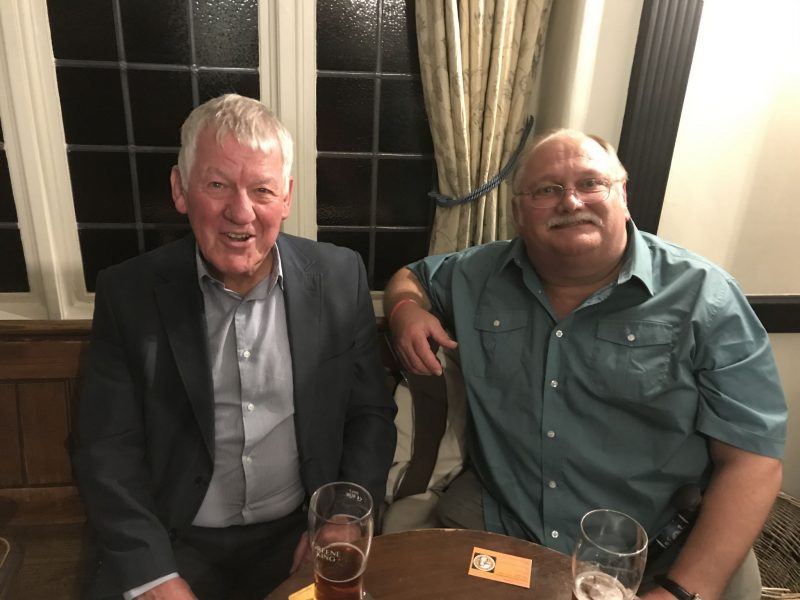 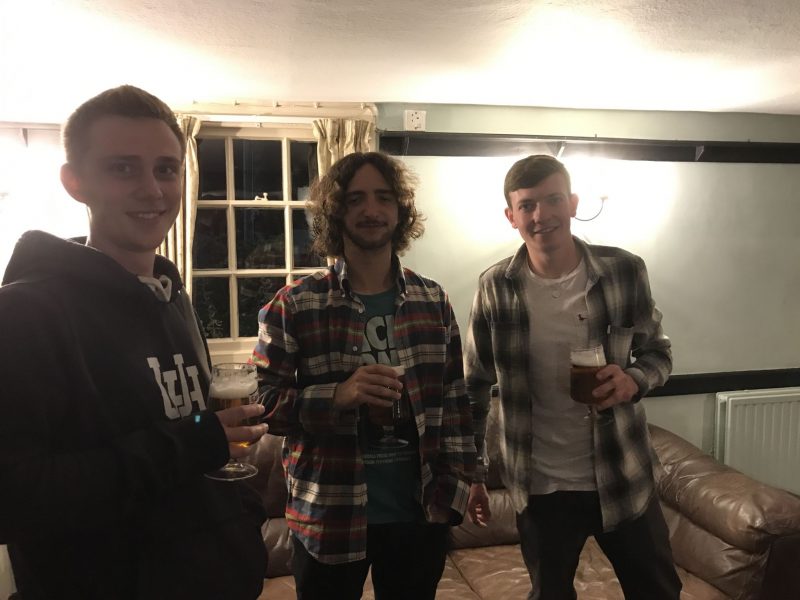 Dirk and the Psycho Chicks 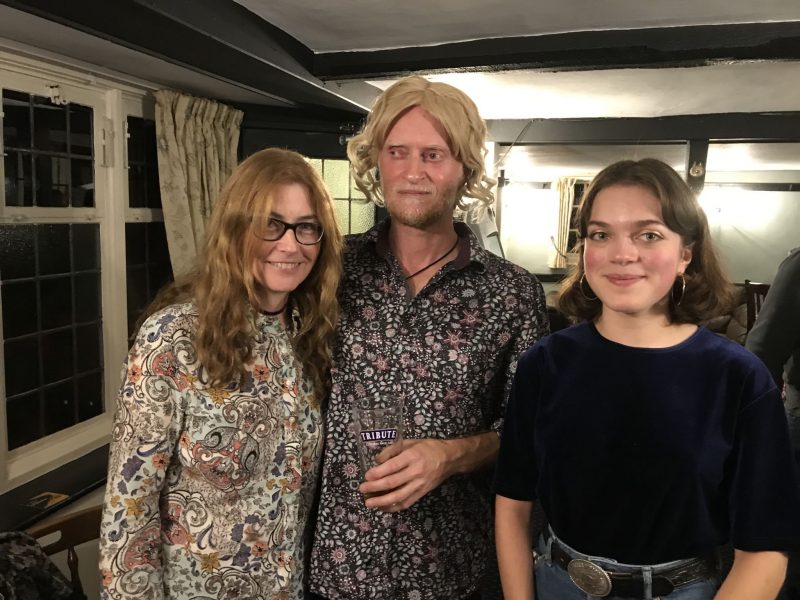 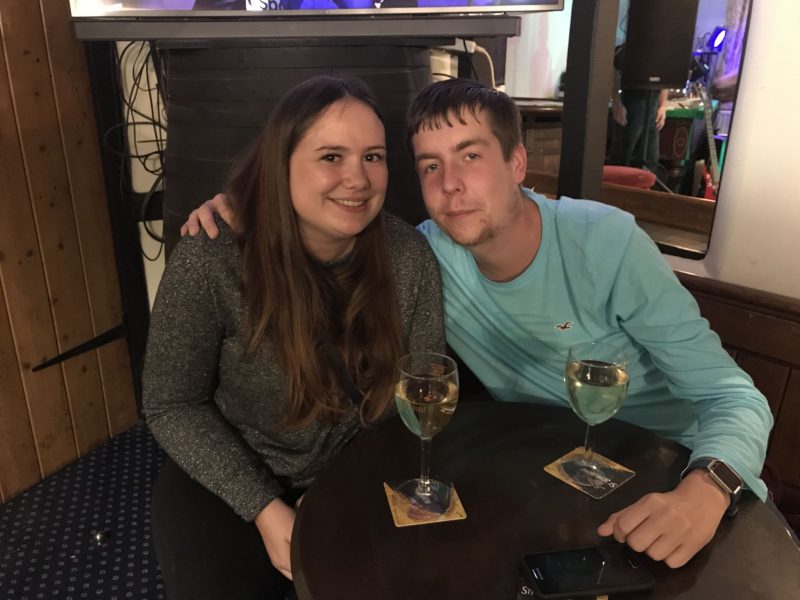 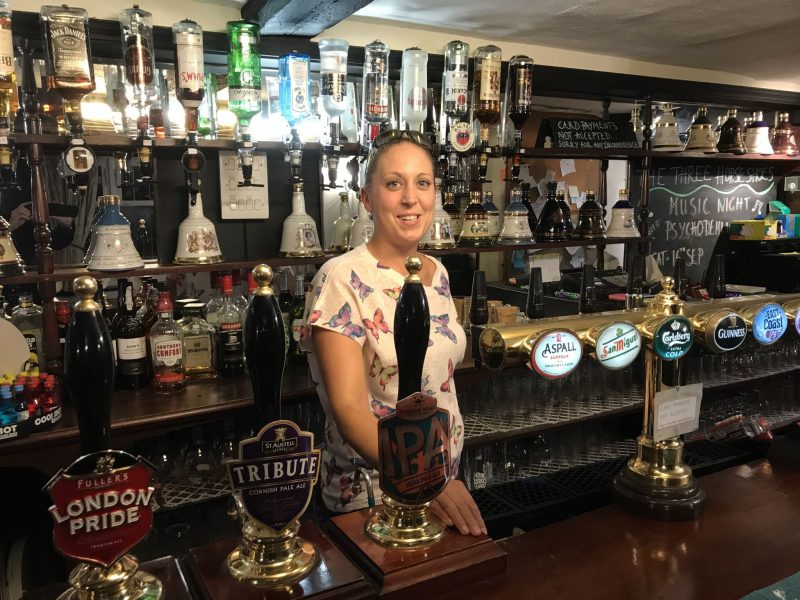 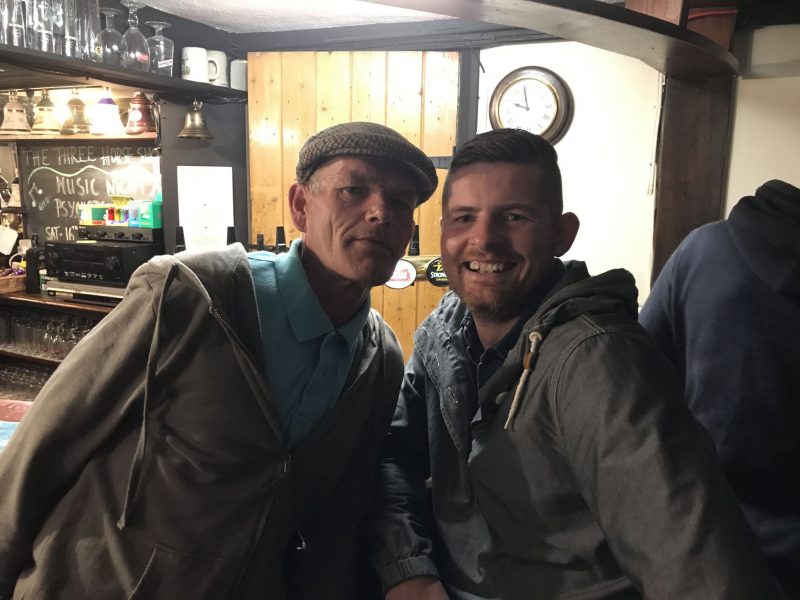 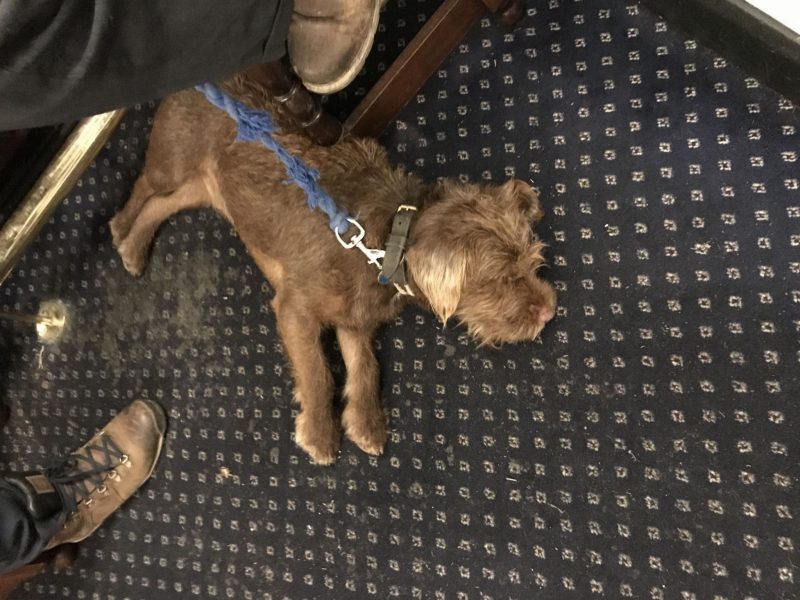 Next gig is at the Horse and Groom, Braintree  on the 1oth of November